Bechuanaland was declare a British Protectorate in 1884 and the Bechuanaland Border Police (BBP) was establish soon thereafter with an initial strength of 100 European men employed to police the territory which is now known as Zimbabwe and Botswana.

Commissioner Sidney Shippard's British Bechuanaland land commission (1885 - 1895) was notoriously partial to Boer filibuster claims. His Bechuanaland Protectorate minerals commission was partial to the claims of Rhodes's British South Africa Company. He was possibly in the pay of the mercantile interests headed by Cecil Rhodes - though, unlike his three successors as Resident Commissioner (Jameson, Newton, and Goold-Adams), there is as yet no convincing proof. There is, however, considerable circumstantial evidence of his assisting the companies headed by Rhodes, and his attitude to African people is reflected in his given Setswana name - 'Morena Maka' (Lord Lies). After his retirement from colonial administration, he was appointed to the board of the British South Africa Company in April 1888, where he rendered 'wise and loyal service'. 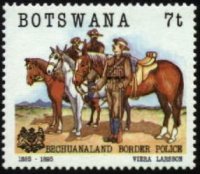 The missionary factor was partially reasserted in colonial administration by the appointment of the Reverend John Smith Moffat as Assistant Commissioner for the Bechuanaland Protectorate - resident at Shoshong and Palapye, and itinerant to Bulawayo - between 1887 and 1895. Son of the great Robert and Mary Moffat, and brother-in-law of the greater David Livingstone, J.S.Moffat bore the burden of being brought up in a famous family. But he was no friend of John Mackenzie, and was assiduously courted by the mercantile interests that wished to take hold of Bechuanaland and Matabeleland. He went along with Rhodes's trickery of Lobengula, but had a fit of conscience when Rhodes tried to do the same with Khama. Shippard and Hercules Robinson were delighted to see the back of him in 1895.

Image right: The BBP honoured on a modern Botswana stamp

Shippard retired in 1895 when British Bechuanaland was annexed to the Cape Colony and arrangements were being made for the Bechuanaland Protectorate to become a British South Africa Company territory, i.e. part of 'Rhodesia'. The Chartered Company took over the Bechuanaland Border Police on its disbandment by the Crown, and this force was held at Mafeking in readiness to act in conjunction with Dr Jameson’s force.

This coin (see image below) used by the BBP in 1893 in their small isolated canteen in Bechuanaland was the first coinage used in this isolated region north of Mafeking.

Image right: The original offices of the Bechuanaland Border Police in Mafikeng

This is a rare token coin with a fascinating history tied in with the BBPs major role in assisting Rhodes' British South Africa Company suppress the Matabeles of Matabeleland in the 1893 rebellion. Two years later members of the BBP took part in the ill-fated "Jameson Raid" into Paul Kruger's Transvaal Republic - an event which did much to precipitate the Anglo-Boer War. Apart from the first few weeks of the War itself, the BBP played only a small part, because the railway link to the main British forces to the south was in Boer hands and Mafeking was under siege.

With the establishment of Rhodesia, the majority of the BBP were absorbed into the British South Africa Police. Its name remained unchanged until independence in 1980 when it became the Zimbabwe Republic Police.

More on the BBP and Jameson raid at this external link

Value in 2005: The Bechuanaland Border Police Canteen tokens are extremely rare and highly sought after - the 1/- piece above is in near UNC condition and valued at about US$1,500. These coins are very rarely seen on auction.